This is your default message which you can use to announce a sale or discount.
Get started
Posted on December 13, 2018February 21, 2021 by JamesLeslie
Spread the love 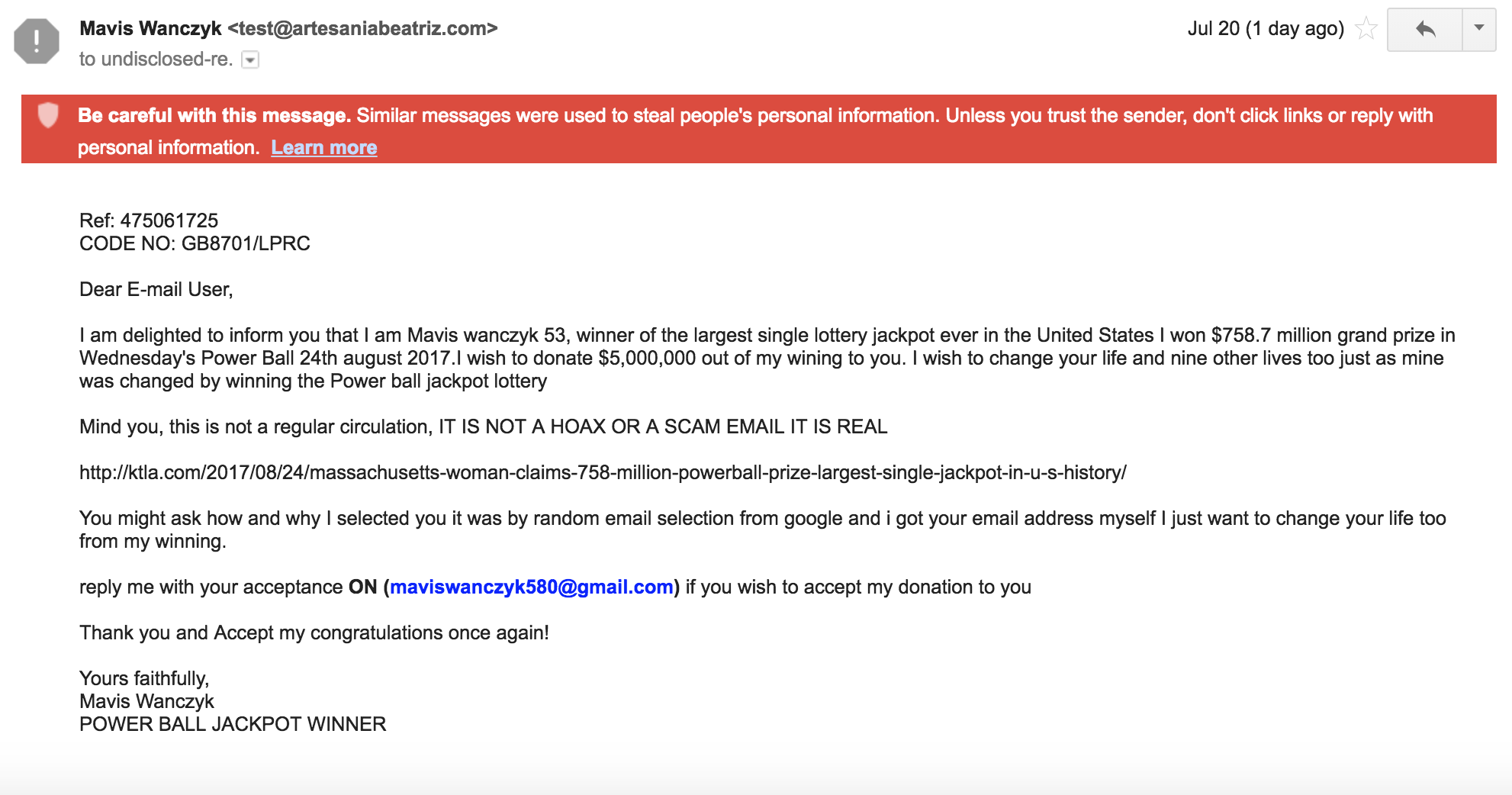 About a year ago a person named mavis wanczyk won the biggest single lottery winning in u.s. history. Unfortunately ever since, scammers have been taking advantage of this winning. They make fake facebook and email accounts. Then they send people messages claiming to be mavis randomly picking them to win a portion of her winning. They then tell the person that there is a transfer fee that they have to pay before they receive the money. Then they take the persons money and don’t give the money that they said that they would give. A few months ago one of these scammers attempted to make me one of their victims. A few months ago I emailed an advertising company about setting up an ad account and they took a long time to respond because they were short staffed. While I was waiting for them to respond, I checked my spam folder to see if they had responded and their response went there and there was an email claiming to be from mavis saying that she had picked me to win 5 million dollars of her winning. Luckily for me I was smart enough to know not to jump right into getting excited thinking that I won 5 million dollars. The fact that the email went to my spam folder and sounded to good to be true made question this right of the bat. I screenshotted it and shared it with my facebook friends and asked them what they thought and several friend felt that it was a scam. One friend sent me the link to an article about this and the emails that it show were very similar to the one I got. After that I felt very confident that this was a scam, so I decided not to respond to the email. Like the article said, the chances of winning a lottery that you did enter are very low. Winning a lottery that you didn’t enter is nearly impossible

Now let’s say that I turned out that mavis cared about autism, found out about my business, and decided to support me with 5 million dollars. First one thing that I would not do is email random people and offer them free money. Now for what I would do with the money. For one I would put some of the money toward my business. I would buy more expensive facebook and google ads to help build my following and hopefully drive sales to make me more money. I would buy myself a high level dslr camera. I currently use an entry level dslr. I would also buy myself a better guitar and amp. I would talk to my family about opening a gallery for my business, and would open one if they thought it was a good idea. For what I would do at that gallery click here. I would also set aside about $200,000 for an engagement ring, wedding, honeymoon, and a house for my future wife for when the time comes for those things. I would set aside a few thousand dollars for a car for when I get my drivers license. I would also support charities that are helping people. One charity that I would donate some good money to is planting possibilities. If they could become what they want to be it would make for a great job opportunity for me. You can learn more about it here.

View all posts by JamesLeslie